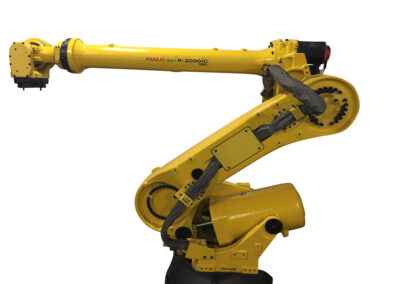 It can be fast and easy to sell a used robot if done correctly. Used robots that are for one purpose or another no longer used in production will recapture critical capital within the equipment resources. Unused robots lose their value every day as the robot ages and also as newer robots are released. Purchases of used robots and used robotic equipment in any volume is what Universal Robotic INC also does, whether it be an industrial robot or a FANUC robot, just contact us and we will let you know about the rest after viewing the condition of your surplus robots. The following are possible advantages for Universal Robotic INC to purchase your used robot:

Many businesses need to make the most of their investments. The robotic equipment that has become an operating surplus can be turned into a production-expandable asset. Within a period of time, Universal Robot INC can turn used robots into capital or provide trade business choices that are better suited to current production requirements. In the used market, at least some value should be retained in many mainstream Robotic brands such as Motoman Robots and FANUC robots.

As you already know, Universal Robotic INC purchases used industrial robots. However, we also purchase individual lines of New & Used robots as well as complete manufacturing robot lines. Even if it is a Motoman robot or a FANUC robot, if it is in good condition and passes the evaluation, then we would gladly purchase them from you.

Universal Robotic INC has slowly been expanding day by day and reaching new limits. When it comes to purchasing robots, we buy from three major countries; Canada, America, and Mexico. All three countries have countless numbers of robots available, if you are from one of these countries; consider yourself eligible for selling us your New & Used Robotics.

Whether you have a FANUC Arcmate series robot or any FANUC robot model that you are interested in selling, Simply Contact us through the given phone numbers or emails. Do note that we purchase other brand robots too like ABB and Motoman. Just send over your industrial robot information and condition (with pictures) over and we will take care of the rest.

It is easier to sell the industrial robots to Universal Robotic INC. We buy new modeled and well-maintained industrial robots. We provide competitive pricing and promote the process as easy as possible. Let us know about individual units or multiple robots you might want to sell.